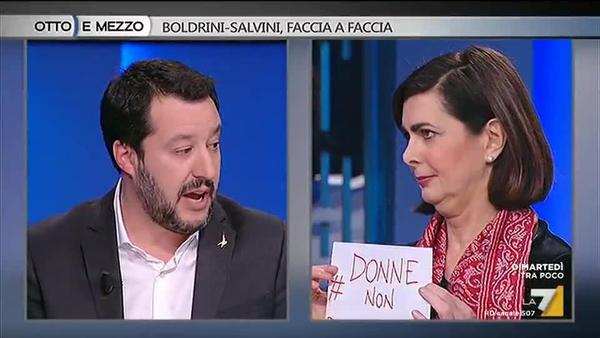 Recently, both in Italy and The Netherlands elections were held while I was in the country. As I followed the news prior to both elections, it struck me how hard it was for me to find public debates between political opponents that, honestly, made sense. A striking example was Laura Boldrini, President of the Lower House in Italy, holding up sheets of paper bearing sarcastic hashtags about her opponent Matteo Salvini, leader of the political party Lega Nord during an Italian TV debate the 13th of February 2018. “How in the world does that improve any conversation?” I thought to myself, and switched off the TV, tired to hear more of the debate.

This example from my personal life apparently does not stand on its own but plagues Western societies to such an extent that political theorists have coined the societal phenomenon of being tired of politics the ‘democratic fatigue syndrome’. This means that, while the idea of democracy is still widely supported (92% of 73,000 respondents in a worldwide survey on democracy indicated democracy is a good cause), in Europe we see also a steady increase of distrust of political leaders accompanied by decreasing voter
turnouts. To me, caring for the way my society is organized and eager to be informed also on a political level, the fact that debates prior to upcoming elections often are full of easy oneliners, personal attacks and big promises don’t help to revive my own trust in politics. Let alone our common trust in politics as a society. So, I wonder: what could be ways to revive and strengthen democracy?

Democratic skills
It may be worth the effort to go back to the beginning and think about what democracy means on a practical, day-to-day level. What does democracy mean if we look at our daily interactions? How democratic are our conversations at the dinner table, at school, at work? Who gets listened to easily, while others may be struggling to get their voice heard? Who do I lend my ear to? And when we make decisions, how do we organize the way we decide, be it at school, in the office or at home? How democratic are those decisions, when we look at how power was for instance distributed in the decision-making process and to what extend include the ‘minority voice’ was included in our decisions? I am convinced that awareness of how we interact with others and make decisions in daily life as well as choosing democratic ways to interact, act and decide in every day social settings, is an important first step to develop democracy “bottom-up”. As we develop these democratic skills in everyday life, this democratic attitude and behavior of individuals may in the long run also improve and/or constitute democracies on a societal and institutional level. From this perspective, I found it inspiring to read about two practical examples in
which young students from ages 10 to 15 gain experience in practicing every day democracy together, believing that with time and practice this may influence a society as a whole. 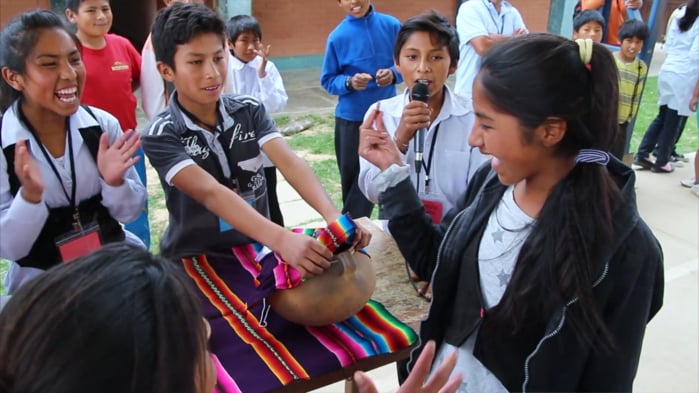 The first inspiring practice is found in Bolivia where, through a lottery system, kids from every class are randomly assigned to ‘organise’ their school together for a part of the school year. The system of lottery to appoint decision makers for the whole community is considered one of the first forms of democracy, introduced in Athens, Greece during the 5th Century BC as well as adopted in Florence, Italy in the 15th Century AC (see below, note 1) . Also Bolivia has an old tradition of lottery, now reintroduced for student government. The use of lottery and rotation makes sure all students may at some point be asked to represent their classmates, including those who typically are the listeners and observers in a group, rather than those eager to speak their mind. As such, student presentation avoids being a popularity contest and the student government itself gives room to a diversity of opinions and viewpoints. Being assigned as student representatives, the students are also taught to work together democratically and ‘horizontally’, using dialogue and brainstorming methods and democratic voting mechanisms. Typical hierarchical student government roles such as president and secretary are abandoned and instead exchanged for
teamwork and random selection of tasks. For more information and/or a toolkit how to get started in your school, see their website Democracy in Practice (see below, note 2).

Governing an island and imagining society – The Netherlands 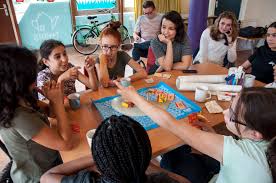 In the Netherlands, Lisa Hu developed an interactive board game called ‘Terra Nova’ (see footnote 3) that in a playful way introduces kids from 10 to 12 years old to questions on how they wanttheir society to look like, using various dialogue and decision-making techniques. In the game, the children become ‘leaders’ of an island and have to think together on how to deal with practical questions that resemble big societal dilemma’s such as

‘If a citizen catches two fishes, can she keep everything for herself, or does she have to
share it with the others’? or
‘One of the inhabitants of the island has fallen ill. Can he or she make use of the fish
caught by the population?’ or
‘What to do with four newcomers to the island?’

During the game, the children are stimulated to ask each other open questions, and becurious about each others vision of the island, helped by ‘question cards’ and various rounds in the game.

If you are wired like I am, and the TV debates put you off from politics, I hope you find a challenge to be democratic yourself in everyday life. You may want to lend your ear to opinions that may be in contrast to how you see the world, trying to understand the other while speaking up when you feel it is necessary. You may also want to analyse power balances in your office, family or school when decisions are they be made. All these tiny practices may make us more democratic as a whole. Go everyday democracy!